That semi picked up on its side must have been a practice setup. Still good. Impressive gear. There isn't a Peterbilt Century M100 there have only been 3 made. The First Century M100 was a Kenworth W900. The Second and Third Century M100 were both Kenworth C500. Also, I would love to see an M100 On A C500W Single Steer Tri-Drive Chassis With A Sleeper Cab, A Knee Boom Under Lift, And Some Other Customizations That Would Be An Amazing Truck.   Bit of a jazzy video, I would have preferred more time spent with each type rather than the chopping and changing. However an interesting look at modern recovery trucks, I drove a 6 wheeled Scammell  ! In the early 1970's. 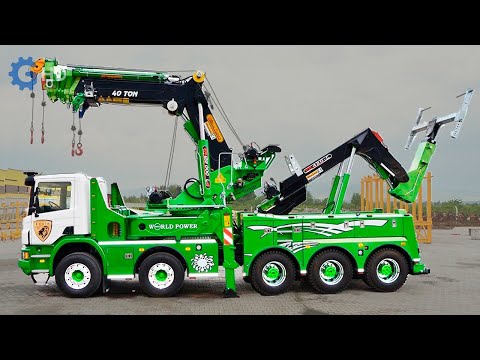 10 Most Powerful Skid Steer Loaders in the World

The weirdest looking tractors with tracks // how could this work? // rotaped tracks

HEAVY MACHINES WORKING IN THE WATER????RC MACHINES IN THE MUD????RC LIVE ACTION CONSTRUCTION