Shipwrecked, scrapped, left behind in a port, or stranded on a beach - there are a few ways in which a ship can become abandoned! Some are down to misfortune, some are down to careless owners, and some take a little from column 'A,' and a little from column 'B.' Almost every abandoned and forgotten ship has a story to tell, though, so we've put some of the very best of them from all over the world here together for you in this video!

Wow Gold Beach Oregon made it, the tug boat is now below the water and you can barely see it with low tide  That last ship, I heard, was not a smuggling ship but was empty when she was caught in one of those freak storms in the Mediterranean. She took refuge in the cove but because the cove was so narrow, it channeled storm waters higher than anywhere else. The ship was pushed ashore and, when the storm waters receded, the ship was beyond the reach of even a full moon high tide. The owners were on shaky financial ground and abandoned the ship.  At 1:38 the narration says that the McDonalds barge is floating around on Burrrard Inlet, Maple Ridge, British Columbia. Those are two different places, Burrrard Inlet does not reach Maple Ridge.  Regards the Mimi S Barret:  The TV show Route 66, season 1 episode 1, about 5:54 mark. There is a paddle wheel steamer chugging along a river. Could it be  At 06:15 the narrator calls the ship the "SS Duke of Lancaster" then at 06:50 the narrator then calls the ship the "Duke of Edinburgh" Which is it (Its actually the Duke of Lancaster, guessing the narrator just doesn't know his Dukes, surprised he doesn't then call it the 'SS Bo Duke' 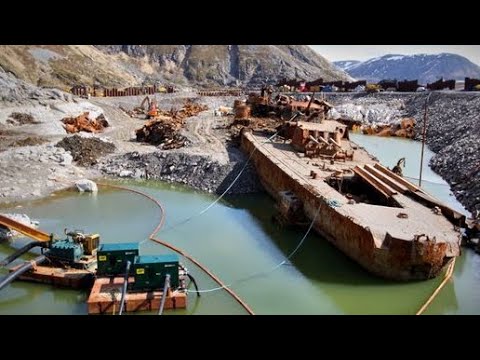