Launching a ship - how hard can it be Put it in the water, give it a name and then smash a champagne bottle on it. Should be pretty easy, right Well, there’s plenty of occasions when somehow things just didn’t go quite according to plan. From the bridge that got in the way to swaying ship that flooded a highway, here’s 15 Ship Launches That Went Horribly Wrong!

2:08  That Dutch launch didn't go wrong - it went perfectly. Every time you launch a ship you get a displacement wave. That's why the traffic was stopped and there's a drainage ditch on the far side of the road. Less than a minute after launch the road was open again. No problems - everything went according to plan.  Most of these ship-launches that you call 'gone wrong' did in fact not go wrong at all. In the Netherlands they close of the road near the shipyard because the large waves are not 'screwups' but go exactly as planned. (that is why the photographers were further away). The first Dutch ship launch was actually a text book perfect launch. In the Netherlands they know that when a ship is launched sideways onto a canal that there will be a surge of water over the other side of the canal. That's why the road is closed off to traffic before the launch (as shown in the vid).  02:50 That launch was exactly as planned. The opposite side was designed to take the overflow waves and drain the water back into the river. Which it did.  So, in reality, here you have a collection of perfectly successful launches, one launch using cgi to give the impression there is timber flying through the air along with the water from a ship with two sterns and no bow, couple of failed launches and a ships and a large collection of accidents.  11:26 just more proof that the cameraman always survives  The ship launch that went horribly wrong in my life was a kayak with me sitting in it…my first time to kayak. You really can roll it back upright when it flips over but as you are attempting to do so you are underneath the kayak in the water, holding your breath. Luckily when you realize drowning is an option, you figure how to upright your kayak. The only way to learn this is how I learned or so it seems. 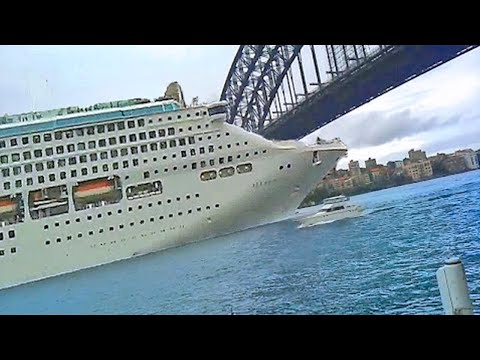