You’d think, after the Titanic, boat designers would’ve figured out how to make their work a little more study. But not quite. Then again who are we to judge, we’ve never built a functioning boat. There are many ships out there that have, rather sadly, gonethe way of the Titanic- lost to the depths of the waters. These are sinking ships caught on camera! Shoutout to Terry Laite and Spencer Oldsrtum for being part of the amazing crew of the Tug Pacific Hickory! (Mate and Boson)

The ship was sunk on purpose if you noticed the holes cut in to the ship and strategic places so it would sink and be sitting on her keel probably as an artificial reef  the one on the odd topic is a ship that was demolished. you can see on the side that several large holes are cut to help in making sure the ship sink upright. Usually, when demolishing a ship to make artificial reefs, holes are cut on the ship's hull above waterline while internal bulkheads and compartments are also cut open to allow water in. then shaped charges are placed in several areas inside the ship's hull below the water line. after they made sure everything was set, they detonate the shaped charges to sink the ship. it usually only takes several seconds up to a minute for ships to sink in this way to avoid the posibility of the ship rolling over if it sinks too slow. As for the mystery ship. It appears to have been an old navy ship. The class of the vessel is a lsd or lpd, you can still see the 3inch/25cal double open gun mounts, (qty of 3 mounts). The ship was stripped of useable/valueable equipment, had additional holes cut in her to facilitate a fast and controlled descent to the bottom to become an artificial reef. 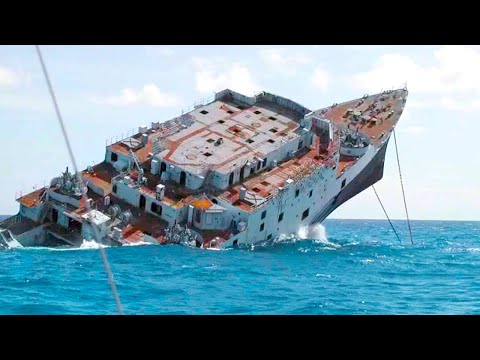 Salvage of the Modern Express by SMIT Salvage