Watch the 150 Case pull 44 bottom John Deere plows at the James Valley Threshing Show in Andover, South Dakota! This is a new record for this engine with 36 bottoms being plowed in 2020. We are so excited to share some footage!

I used to go to the Steam Show in Barlow Ohio as a kid back in the 70's.  There were nearly a dozen different models of the Case Traction steam engines there.  It was amazing to see these survivors from a by-gone era still doing the jobs they did nearly 100 years before.  I remember a hay baler that was operated at the show and it produced the heaviest bales of hay or straw I've ever seen, they weighed well over 100 pounds.  The steam press on the baler applied so much pressure, it actually compacted the hay into a bale that was so dense you could hardly move it.  Such truly amazing machines with really intricate gearing that produced incredible amounts of torque.  They got the job done.  Great to see you're keeping this rare piece of America's past alive.
Those old traction engines and steam trains are amazing. They are like living things, and I can understand how people can become attached to them in a way that you couldn't with electric or diesel.. Maybe because through the observable moving parts we see the similarities to our own biological  bodies. Needing nourishment and maintenance.  So beautiful!
The amount of power being produced by this SINGLE CYLINDER steam engine is phenomenal!! This is the result of 180 lbs. of steam pressure acting on a double-sided 14 inch piston with a 14 inch stroke. 2 speeds forward... slow and slower! (actually about 5.7 mph. in high gear, and 2.6 mph. in low) That said, with the amount of gearing, it produces over 8000 ft. lbs. of torque at the wheels! This is the equivalent output of 8 - 2021 Dodge/Cummins turbo diesels running at full power @ 1800 rpm.!! This tractor does this at 200 rpm. at crank speed and probably with quite a bit less noise. 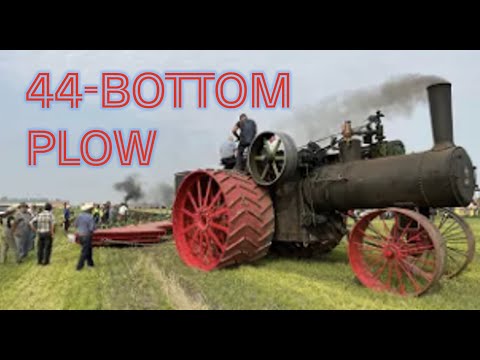 A shocking find in an oak tree