An icebreaking ship is designed to sail through heavy ice, and provide safe waterways for other boats to sail through. Today's video is on five amazing ice breaking ships. Several segments are licensed under Creative Commons (CC) U.S Coast Guard (CC)

I sailed as 4th Engineer on the MV Terry Fox and her sister ship the Kalvik in 1990's offshore oil in the Beaufort Sea.24,200 BHP thru four Stork Werkspoor diesel engines.They are rated Arctic class IV ( 4ft of ice [email protected])They were built in separate shipyards in British Columbia with the Kalvik adding a helideck on the bow later on.  The CCGS Terry Fox was working with the CCGS Louis St. Laurent, also an ice breaker.  All that spray at the bow is a water/air jet system designed to keep ice from freezing against the hull.  "Mostly around Alaska" The majority of the USCG icebreakers work on the great lakes. 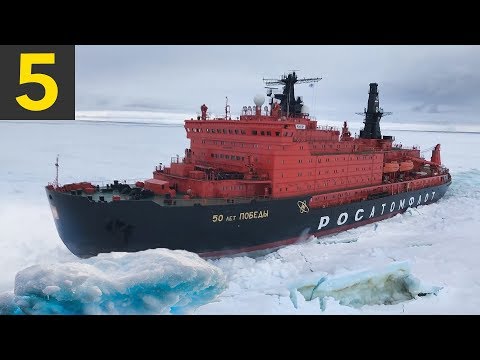