Clashes in Brussels between police and ranchers

Clashes in Brussels between police and ranchers

The protest rally in Brussels has been resolved with the intervention of the riot police and a "milkmaid" war.

The farmers — mostly French, Belgian, and German — are protesting against plunging food prices in the EU which, according to AFP, are the result of a combination of factors, including a change in dietary habits, slowing Chinese demand, and the Russian ban on Western food products which was implemented in response to Western sanctions over the situation in Ukraine. They want the EU to provide them emergency funds and to create a "fair price" for milk.

In France, approximately 22,000 sites, or 10% of all farms, face bankruptcy as milk and produce prices continue to plummet, according to the country's agriculture minister.

The scenes being uploaded by observers to social media are extraordinary. Protestors are hanging sculptures of cows from farming machinery, pelting law enforcement with eggs, and waving banners which read "Europe is drowning in milk." 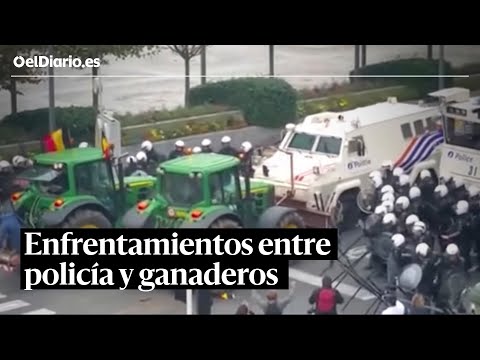 How to export millions of sheep, pig, cows - Modern Transport Technology by aircraft and big ship

Old And New Tractors.. CRAZY To See How Much They've Changed!