Getting Truck Stuck in Mud - Twice!

Getting Truck Stuck in Mud - Twice!

It's bad enough to get stuck once in an articulated dump truck (ADT), but to get a dump hauler stuck, but twice, back-to-back, performing the same action as the first, hoping for a different result is truly idiotic. Particularly when the first load resulted being consumed in nearly four-foot-deep ruts. It's true, the ADT is very large and obviously very heavy. Particularly when filled with mud to heaped capacity. It's also true articulated trucks are particularly heavy duty built to transport large, heavy dirt loads over rough terrain. But it doesn't take a rocket scientist to realize the job was a bad idea from the start but hindsight is 20-20, I suppose. Anyway, the video speaks for itself. The first attempt a failure. The second attempt a failure. And the resulting mud extraction resulted in a third fail - burning out the Mercedes engine - destroying a fuel injector and who knows what else. It's impossible to deny my work consists of fail, fails and more fails. This goes to show you kids, and anyone else watching, which by my channel numbers, includes only a handful of reluctant family members forced to watch, that inexperienced operators make inexperienced decisions. And inexperienced decisions in the world of heavy equipment and articulated dump trucks results in dangerous and expensive repairs, long downtime but makes for great fail videos. The articulated truck stuck in the mud is all-wheel drive. The front tractor section and the rear dump body is steered by pivoting the front in relation to the back forcing the tires to follow the same path, in theory, making the haul truck less prone to being bogged down and stuck in mud and thus earning it the title of the king of kings of off-road vehicles. Well, that may be the case, except when I am on the job site. All bets are off when that i the case, even the best of the bet off-road trucks become susceptible to my bad decisions and poor heavy equipment operational skills. My truck is an old mining articulated truck and its orange and you'd think I remember the manufacturers name but of course I don't. According to Wikipedia Caterpillar, Terex, John Deere, Volvo CE, and Komatsu all manufacturer them. So, I'm guessing mine is a Komatsu. Either way, the ADT is old but it runs despite my many efforts over the years to destroy it. I purchased it for the farm for a pond rehabilitation project to haul sediment and green mud from the pond to open pasture as the pond had silted in entirely. I shot videos of the project but have not posted them. I will in the coming months. Anyway, the truck worked well for mud, sediment and soil transportation. I had originally purchased a John Deere 6x6 articulated truck from AuctionTime and that proved to be a disaster. It was dead on arrival even though videos showed the truck hard at work and the seller made claims that that was the case. AuctionTime does not provide buyer assistance in their TOS and the seller didn't show an interest in working with me to make the transaction a fair one so I took the loss and unloaded the truck as scrap and moved on. The haul dump truck shown in the video has been used for other applications prior to me purchasing it including agriculture, it served for many years on a local mine, as well as on many construction sites. Articulated dumpers outperform all trucks including rigid haulers (with the exception of some military vehicles) in hauling material over rough terrain such as sludge and marshes and swamps and muddy fields. From my experience 6x6 trucks are particularly rugged and handle steep inclines, muddy and dangerously slippery conditions. Best of all the articulation of the trucks enable the trucks to excel in cramped working conditions like many construction sites tend to be. There has been some debate on our job site as to what caused the engine to explode. We think the driver accidently pushed the range hold button and hammered the engine over and over again trying to become unstuck - that part not shown in the video. Once the articulated truck was unloaded and the button removed from range hold state, the 6x6 was able to be extracted from the mud (that part is shown), but seconds later the engine was smoking and fluid spraying everywhere. So, there you have it, 3 heavy equipment fails in a 1:14 video - two issues of filling the truck and getting stuck in many feet deep ruts and the third the resulting carnage of the dump truck's engine being blown out. Just another day on the Noble Farm job site - bad decisions resulting in expensive repairs. Rinse and repeat. It's what we do. 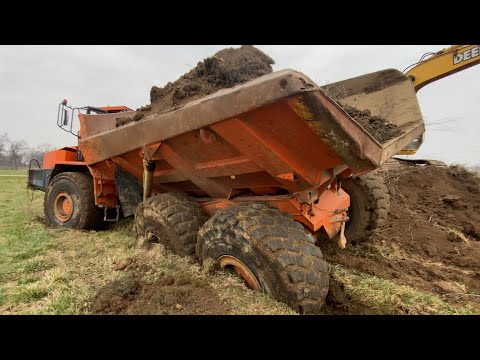 Tallest Building Demolitions in the World

Bulldozer TG 120 works in the forest

How much load can a truck pull? The huge Australian road trains

KOMATSU GRADER 511A stuck in the mud.

Semi-Truck Loses Back Wheels Trying to Turn Around Safety Barriers

The Most Impressive Construction Trucks And Machinery You Have To See