This is a sped up view of a few months work building a table saw from scratch.

I used the motor from a really cheap table saw. I thought I would just have to change its top and fence to have something good enough but it turned out the original mechanism had way too much play to be used properly. So I decided to remake everything around the motor I had.

I planned everything under sketchup before starting. I later made a Biesemeyer style fence which isn't seen in the video. A blade guard, a raving knife and parallel channels are also coming next.

The plastic parts are made from a 1mm thick sheet of Delrin.

This table works great except for dialing a precise height. It turns out even the motor was crap after all. The blade teeth don't have the same height depending on the rotation. There's about a 1.5 mm or 1/16th gap between low and high spots ...

UPDATE:
A link to the sketchup files I used. They have not been revised, some errors are included and I modified a few things when building the tablesaw. But it should help those who would like to build something similar.
https://drive.google.com/openid=1cyw... 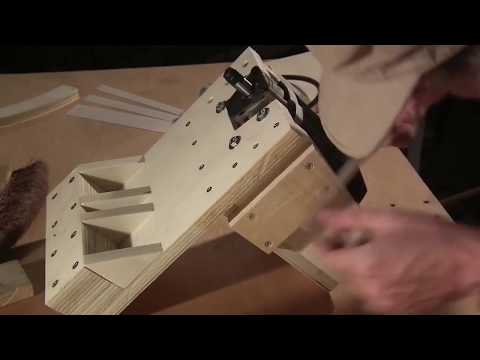 How To Build A Drill Press Sanding Drum

How to make Horse Cart step by step

How to Build a Pergola | Mitre 10 Easy As

DIY Table Saw - How to Make A Homemade Table Saw

How to make a (NOT RUSTIC) bench from reclaimed pallets

You won't believe how this table saw jig works !!

Woodworking Information : How to Bend Wood to Make Furniture