Check out the most insane bullets in the world! This top 10 list of scariest and deadliest ammunition creates some of the most dangerous military weapons ever!

11: Dragon’s Breath Rounds
Dragon’s breath rounds consist of mostly magnesium pellets and shards. These are considered some of the coolest and most exotic shotgun rounds ever! It is not considered a tactical load and is really just for fun although it can be quite dangerous.

10. Hollow Points
Hollow point bullets have exactly that. A hollowed out shape in the point of the bullet which causes it to expand as it hits its target, causing more damage to tissue.
They are outlawed for use in warfare, and in many countries and states in the US, but they are used by some law enforcement personnel, and ordinary gun owners in self-defense.

9. Railgun Projectiles
Actually, who needs bullets at all anymore The US Navy electromagnetic railgun is essentially a super weapon!! This futuristic projectile is safer to stockpile than explosive ammunition and much cheaper. The railgun can fire a hardened projectile and blast anything it hits like a meteorite from outer space.

7. Nuclear Bullets
After the collapse of the USSR, the media started reporting on the presence of a mysterious weapon developed since the 1960s. According the original article which was published in Russian, Soviet physicists were producing nuclear bullet fillers out of an element called californium.

4: Macho Gaucho Rounds
Macho Gaucho rounds mimic the appearance of the “bolas,” a device made by linking two heavy balls with a string of one-to-two feet. Gauchos or South American cowboys have used this contraption for hundreds of years to hunt game and capture cattle since it entangles the animal’s legs causing it to trip.

3: Jihawg Ammo
Labeled as the most controversial round in the universe, the Jihawg Ammo is the subject of much criticism and ridicule, even in the gun owning community.
Its creators, believed to be some Idaho gun owners, were sitting around a campfire enjoying their drinks.

2: Punt Gun Shells
The Punt Gun is the largest shotgun ever, used avidly by wildfowl hunters in the 19th to 20th centuries. A typical punt gun averaged 8 feet 4 inches in length, weighed 43 kg, and had a bore diameter of 2-inches ( 51 mm)

1: G-2 Research R.I.P. Bullet
Topping this list of insane bullets is the Radically Invasive Projectile, nicknamed the “Rest in Peace” bullet. Many consider it the world’s deadliest bullet, and the manufacturer markets it as “the last round you’ll ever need.”

Origins Explained is the place to be to find all the answers to your questions, from mysterious events and unsolved mysteries to everything there is to know about the world and its amazing animals! 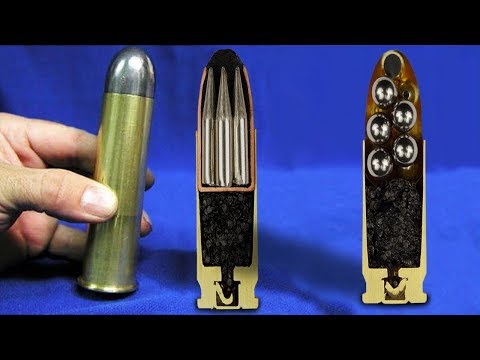 Is This the Easiest Way to Pick a Lock?

How To Make A Hydrogen Generator | Water To Fuel Converter

Learn How to Build a Raised Bed with Benches

The Difference Between AWD vs 4WD

How to Make a Remote Control Lawn Mower at Home

7 Awesome Rideables You Should Try