Yes, skip to 3:20 to see the drivers slip. I figured I would toss all of the footage in, because who doesn't want to see more 611 I'm not sure why this video is suddenly getting so many views, but hey, enjoy the steam! N&W 611 has trouble getting traction while departing Old Fort, North Carolina. The Blue Ridge Special, April 10, 2016.
1. This was the first time I chased a train.
2. This was recorded with a DSLR that I bought less than a week before this was filmed. I was testing the video mode while it was stationary to see how the steam, smoke, rods, etc. would look with a high shutter speed. Having to manually twist a lens to zoom in and out is going to make any video look choppy.
3. I didn't have a tripod. This wasn't meant to be cinematic quality, and I was mainly taking photos anyway.
4. I was at the right place at the right time. If I'd known the drivers were going to slip I wouldn't have zoomed and panned all over the place.
5. Record everything you can, because you never know if this will be the last time you get to experience something this awesome!
The wheel slip is in my opinion one of the best parts about trains. Because it shows you the power of the engine in a brief second . Also probably because of the polar express frozen ice scene.  These machines were amazingly engineered,  designed and then built by a small army of craftmen that took great pride in what they produced. 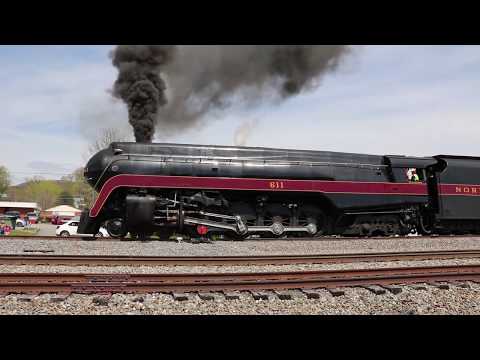 Top 10 Longest Train In The World