I bought a new property to shoot primitive technology videos on. The new area is dense tropical rainforest with a permanent creek. Starting completely from scratch, my first project was to build a simple dome hut and make a fire. First, I took some wood, Abroma mollis, for fire sticks. I knapped a small stone blade and used it to strip the fire sicks. Palm fibre was then taken for the tinder. The fire stick kit was then placed under a palm leaf to keep it out of the rain.
Next, a stone from the creek was fashioned into a simple hand axe. This was used to cut a staff that was used to clear a path to the hut location. The location for the hut was a clearing densely crowded by native raspberry. This was then cleared using the staff and a small 2.5 m circle was levelled ready for building.
Eight 2.75 m long saplings were cut using the hand axe and brought to the site. Eight holes about 25 cm deep were hammered into the ground in a circle 2.5 m in diameter and the saplings were then planted in. The tops were brought together at the top and tied with vine. A door lintel stick was lashed to the front about 75 cm off the ground giving a low door way.
A stone flake was used to cut about 600 palm fronds. These were split and lashed horizontally to the frame creating a thatched dome. Mosquitoes are a real problem here so a fire was lit. The fire sticks from before had a hole carved in the base boards and had a notch carved to let the powder pour out.
The spindle was twirled in the socket and smoking powder poured out producing a hot coal. This then ignited the palm fibre tinder. The fire was transferred to the hut and a small hearth was made of stones. The fire makes a big difference in the number of mosquitoes which seem unable to tolerate the smoke. The dome was completed up to the top and a small cap was made from lawyer cane and fronds to place on the top to keep rain out. When not in use the cap can be removed to let in more light like a sky light.
Finally wood was cut for a bed. This consisted of wooden stakes hammered into the ground at the back of the hut behind the fire pit. Part of the bed frame is attached to the sapling uprights that form the dome. This works ok without the frame shaking too much due to the low attachment point of the bed. Wooden boards were then placed on this and were covered with palm fibre for bedding. Firewood is stored just inside the entrance on the left side of the door looking in. The bed sits behind the fire pit so smoke and flames deter insects or large animals reaching the occupant. Fire sticks and tools are kept just inside the right side of the entrance.
The small hut is simple to build and creates a small, dry shelter for camping and storing tools. Though it is dark, the cap can be removed in fine weather to provide a fairly well-lit workspace protected from annoying insects. This new area has good stone, clay and materials lending themselves to elaborate shelters. A permanent creek runs through it. Mosquitoes are abundant here though and will be an issue. The Cassowary, a large, horned, flightless bird lives in this forest. It’s the most dangerous bird in the world, but generally only attacks when threatened. 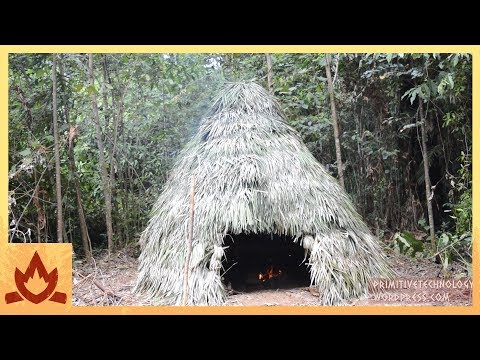 Chainsaw fails and idiots cutting trees. FAIL COMPILATION about how not to remove trees.

10 COOLEST TENTS IN THE WORLD

3 Ways to Open a Lock

Top 10 Biggest Ships In The World