An £850,000 digger which weighs a staggering 80 tonnes is stranded off the coast of Britain after getting stuck in the water while building a new £1.3billion wind farm. The expensive piece of equipment was designed to drive and move in the sea - without getting the person in the cabin wet. However, it became stuck while working on the Rampion Offshore Wind Farm, which is being developed by energy company E.ON. The Caterpillar elevated excavator became lodged in one of its trenches and the cabin is partially underwater off the coast of Worthing,

This is great - people have seen the digger from the shore, but to get up close when the tide is in is fabulous. I took my camera down and did a piece about the crane the day before they removed it. It had become a bit of a landmark. One day, you will have to take a boat out to the wind farm and shoot some pictures around the turbines. We can just seen them sticking out of the sea from Worthing beach. It would be lovely to get a closer view. Keep up the great videos. 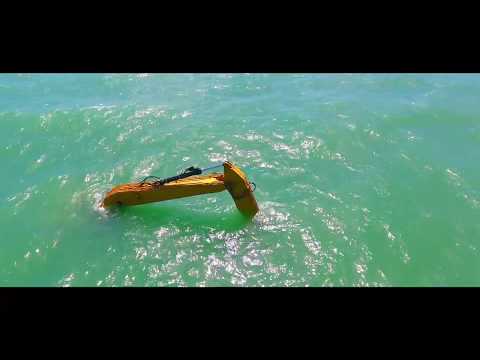 The weirdest and strangest trucks and trailers you have to see ▶ Trailer for 1000 Tons!!

The Most Incredible Arctic Trucks you have to see ▶ KamAZ 'Arctic', Ghe-O Rescue

THE BIGGEST TRUCKS In The World