Scary Hilly Work-Massive Landslide-JCB Excavator-Clearing Mudslide Dirt-Skillful Operator Often we hilly villagers have to face the difficulties after the rainy season because of hilly mudslide, road slide and landslide. When we talk about the hilly road, we have very narrow hilly road and it is very difficulty for two small vehicles to pass from the opposite direction. In some places we do not have even the small vehicle passable road. In such places hilly villagers have to depend upon the very narrow passage of narrow foot track. Every goods that are produced in the hilly farms should be carried using own muscle power and reach to the city market to sell. Similarly, the needed goods from the city market to the hilly villages should be carried along such hilly narrow foot track. So, if the there occurs the road slide, mudslide or hilly landslide, the villagers problems still will be added. In such case, heavy equipment like backhoe loader, excavator, bulldozer and the like are becoming very helpful to the hilly villagers for removing landslide, road slide or hill slide. In the presented video, we can see jcb excavator for removing the hilly landslide dirt. Working in such situation, it is very scary work. The fearless jcb excavator operator skillfully clear the mudslide dirt. Sometimes we can see the land and boulders falling from the top of the hill, that can harm the excavator and operator but, the skillful excavator operator save himself and the jcb excavator and complete the assigned task within the limited budget and assigned time frame. 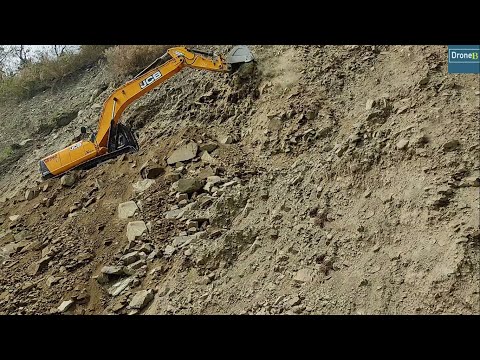 The Worst Excavator Recovery Of My Career

The Most Incredible Trailers and Special Trucks ▶ Mobile Truck Axle