** No narration in this video. CC enabled to describe process. **

Natural wood beverage coasters made from thinly sliced tree branches. Stylish and fun to make, these coasters are a great addition to any home, and make great gifts!

Dry tree branches were chopped up on a tabletop band saw into small pucks, which were then glued to a thin sheet of plywood. The pucks were staggered and were glued to overhang the edge of the plywood on three sides, leaving the fourth side straight as a reference for the table saw fence.

Once the glue had dried overnight, the straight edge of the plywood was referenced to the table saw fence and planks were cut. To make the surface level a router was used as a planer. Setting the router base on a wide sled which rides on temporary rails. The planks were set between the rails with hot glue, then the router was lower after every pass to trim the wood down to a consistent height. The planks were easy pried up after planing.

Using a cross cut sled, the level planks were cut square. Each was finished with Teak Oil to give a nice color and finish. Rubber pads were placed on the underside to stop them from sliding around on a table.

These are going to be gifts for friends and family :)
Full build tutorial: https://www.instructables.com/id/Slic... 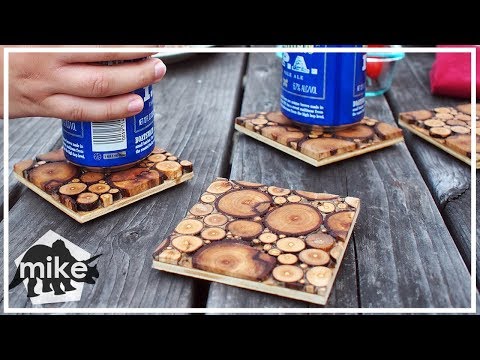 How to Make a Curved Railing (No Steam Required)

Turning a Bracelet made from Tobacco Sticks

Building Without Nails The Genius of Japanese Carpentry

How to make a Mini Lathe

How to make a Sharpening Jig

Beautiful furniture made of old wooden barrels. More than 50 ideas!