The Falkirk Wheel is the only rotating boat lift in the world. An amazing piece of engineering which links the Union Canal with the Forth and Clyde Canal.
Historically, the two canals had been joined at Falkirk by a flight of 11 locks that stepped down across a distance of 1.5km, but these had been dismantled in 1933, breaking the link.

The boat here is lifted from the canal basin beside the Forth and Clyde canal up to the aqueduct, before going through the 160m/1095ft Rough Castle tunnel to the Union Canal.
Wheel rotate sequence speeded up by x2 as lift takes 5 minutes!
The Falkirk Wheel was opened by the Queen in May 2002, and is now one of Scotlands most popular tourist attractions.

The wheel has an overall diameter of 35 metres (115 ft) and consists of two opposing arms which extend 15 metres beyond the central axle and take the shape of a Celtic-inspired, double-headed axe. Two sets of these axe-shaped arms are attached about 25 metres (82 ft) apart to a 3.5 metres (11 ft) diameter axle. Two diametrically opposed water-filled caissons, each with a capacity of 80,000 gallons, are fitted between the ends of the arms.
These caissons (also known as gondolas) always weigh the same whether or not they are carrying their combined capacity of 600 tonnes of floating canal barges as, according to Archimedes' principle, floating objects displace their own weight in water, so when the boat enters, the amount of water leaving the caisson weighs exactly the same as the boat. This keeps the wheel balanced and so, despite its enormous mass, it rotates through 180° in five and a half minutes while using very little power. It takes just 22.5 kilowatts (30.2 hp) to power the electric motors, which consume just 1.5 kilowatt-hours (5.4 MJ) of energy in four minutes, roughly the same as boiling eight kettles of water. 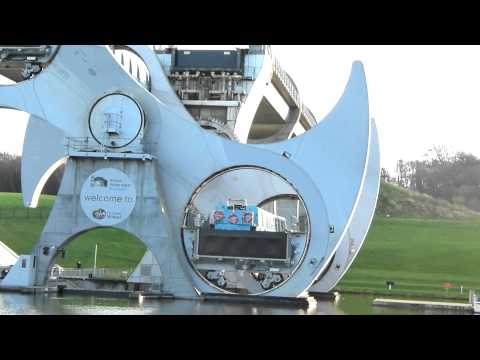 Can You Start A Fire With A Pencil?

How to Make a Mini Dremel Tool

How to make a Motor House Boat

How To Make Fire With A LEMON.

36 CAMPING HACKS THAT ARE ABSOLUTELY BRILLIANT

25 BEST LIFE HACKS FOR YOUR GADGETS

20 Genius Products You Need For Your Backyard

How To Make Free Energy Generator At Home

13 Clever Ways to Fake High-end Looks in Your Home