None of the videos you are about to see have even been shown publicly. As with everything here, pretty much. On August 5, 2017, a United States Marine Corps MV-22 Osprey assigned to Marine Medium Tiltrotor Squadron 265 with the 31st Marine Expeditionary Unit, took off from the amphibious assault ship USS Bonhomme Richard and headed for the USS Green Bay as part of an exercise when, with almost no warning, everything went sideways. The Osprey struck the USS Green Bay and crashed in Shoalwater Bay on the east coast of Australia. Although a heroic effort resulted in the rescue of twenty-three personnel, there had been twenty-six aboard the accident aircraft. By the end of joint-US and Australian Navy recovery operations, three marines were confirmed dead. This video presents two cell phone camera videos of the tragic mishap, video of the accident aircraft's recovery, and new photographs from a number of other MV-22 Osprey mishaps. 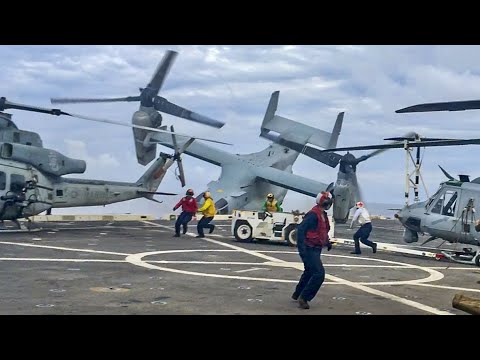