An Airbus A330 being sunk as an artificial reef to around 30m deep in the Aegean Sea. The aircraft is located approximately 1 nautical mile from Ibrice Harbour and is aimed at bringing scuba diving tourism to the area.

Let me explain to some people who may be confused of what is going on here.
The old plane was sunk for the purpose of tourism, especially for divers. These divers go under having their full gadget on, to have a feel around it. To them, it is fun. It can also serve as a training ground. For instance, if a plane crashes how do we rescue people It is neither a trash or a pollutant as someone may think.  Eventhough i like artificial reefs (mostly as fishes'  gathering places and not for scuba purposes), i think that after some months, it will appear a lot of rust all over the area.
Since i like very much to dive in reefs or caves, i have to keep you aware that experianced divers hate those "sinks on purpose"
If it was a real crash, (thanks god it isn't) it would be different , but this fake sink it is not attractive.
There are a special concrete mix that could be sunk and become after a while, a normal reef This would be excellent for the environment and the turists too (after months it would be a shelter full of all kinds of speces) 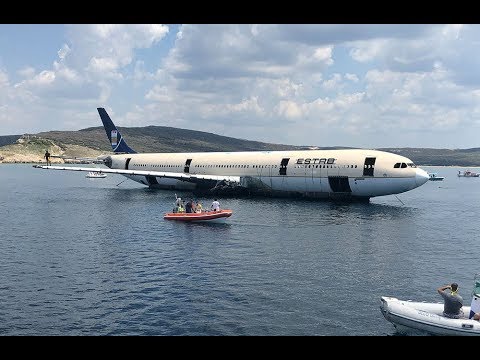