During last couple of months, while I was working on curved beam glulam project, I separated a lot of boards that had worm holes, blue stains and knots that fell out.. It became quite a big pile so I started wondering what to do with it.. It would be a shame to turn them into smoke and heath energy so I decided to make this experimental project.. I'm quite satisfied how it turned out.
I started by making sure all the slats are same width and thickness so I let them trough a planer. Then I simply glued the slats together with enough excess wood to mill later on.. I used two component melamine glue which holds quite well even though no pressure is applied. I used approximately 10 kg of glue. When the glue was set after few days, I removed large chunks of wood with rotary file so the robot has less work.. Robot had somewhere around 10 hours of milling and surface planing. After milling, I fixed the small cracks with wood putty and sanded everything with progressively finer sandpaper. All together, this project took me around 30 hours to make and yeah, It's 90 kg heavy ;)

Thank you for watching and don't forget to subscribe if you liked the video!:) 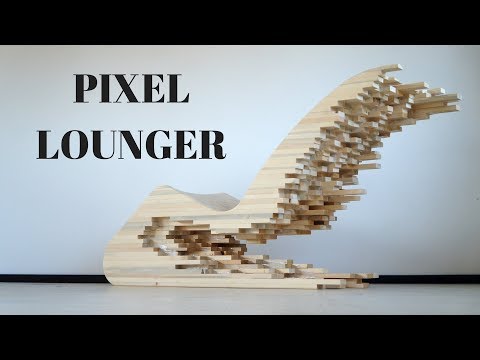 How To Make Free Energy Generator At Home

7 Best ELECTRIC tools You should have in 2018

How to Cut Boards & Planks With a chainsaw freehand

Make Your Own Sanding Belt

How to Build a Pallet Sofa Step by Step

Log Cabin TIMELAPSE Built By ONE MAN In The Forest

How to make a spinning drum sander for drill press

Make a Bowl with a Router