Diepploegen door Bijker Bulldozerverhuur uit Rouveen. Hier wordt bijna twee meter diep geploegd om diepliggende zandlagen naar boven te halen om de grond beter bewerkbaar te maken. Contractor Bijker Bulldozerverhuur of Rouveen, The Netherlands seen busy with deep ploughing using a Caterpillar D8H. D8E and D6R with a combined horsepower of 650HP! The plough is self-build and goes to two meters deep. The top layer soil is ploughed under and the lighter sand and peat soil is brought to the surface to make the land more suitable for other crops and easier to work on.  Wow...would love to know what's going on here.  The biggest plow I ever ever seen was somewhere around the 2 or 3ft deep mark.  Was built as a prototype back in the day for soil modification up around Stettler Alberta (and as well as farther east and into Saskatchewan I believe.) I can't remember exactly the terminology they used when explaining it's use, but I guess there was a sort of layer or crust under the top soil that trapped alot of the nutrients below it.  The only way to break it up was by either ripping or this deep plow.  Ripping is a temporary solution, as the crust reforms over time, but this plow was apparently  permanent fix.  Only problem was that it maxed out at around 1 acre/hr.  It stripped off the top soil, plowed a furrow, and then deposited the top soil back on afterwards.  Quite a machine!  Now, that is a plow!!!!  Two meters deep would be over most guys' heads.  You will have to show us how you prepare the plowed land for use.  We/I would like to see the steps it takes to make it suitable for planting and also find out what kind of crop you would plant on this land.  Great video as always!  Farmers use the same plows year after year. When you plow a field to the normal depth (6-12inches) for years a "plow layer of compacted soil" develops in the bottom of the furrow. This layer blocks drainage. Depending on the crop it can even block the growth of roots. There are several ways to correct this problem--deep plowing is one of them. No till is another. With "no till" you stir up the surface with a harrow or just seed the crop through the stubble left over from last year.  The Main reason for plowing that Deep is To mix different soil types together. In Texas where the soil can be Very sandy. In fact it is called Sugar sand or blow sand because of how little wind it takes to move it. When my grandfather was a boy during the Great Depression they lived in Oklahoma. He said that when the winds would pick up and start blowing the sand around it would cause static electricity that was visible on the barbed wire fences and anything metal that was not grounded. They also use those Big plows to fix farmland that had been flooded out. 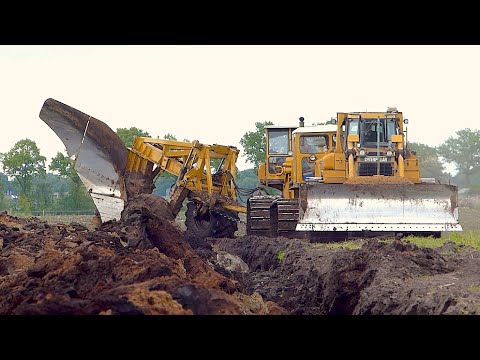 Salvaging an Abandoned TD9 Bulldozer from the Forest.. Will it start??